14 Dec The Challenges Facing Chemical Pump Manufacturers and Their Solutions

Posted at 10:55h in Articles by Carl Deary 0 Comments
0 Likes

For centuries the sole task of the various pumping devices in use was to transport water. Initially, primitive creations such as the Middle Eastern shadoof did little more than transfer liquid from rivers and lakes to those standing on the shore and, only within the last century or so has it been possible to leverage machine power to transport water and other liquids over vast distances along a pipeline. However, it is not distance but the properties of some of those liquids that have posed the most significant challenges. Accordingly, chemical pump manufacturers worldwide have contrived some innovative ways to overcome them.

Despite being the closest thing to a universal solvent, water has little effect on the interior of a pipeline or the equipment used to keep it on the move. However, when in the form of an aqueous solution, many substances can behave far more aggressively. Special measures are frequently essential to preserve the integrity of a pipeline and prevent damage to expensive pumping equipment. While cast iron and bronze were once the only materials at their disposal, the rapid growth of the modern chemical industry has forced pump manufacturers to explore metals more resistant to the corrosive effects of acidic and alkaline liquids. The first of these was stainless steel.

That said, there are more than 150 grades of this metal and, while all display anti-corrosive properties superior to those of bronze and cast iron, some are more resistant to corrosion than others. In practice, while stainless steel may fail to withstand the effects of some strongly corrosive liquids, it can provide good protection from the abrasive action of suspended solids such as wastewater and slurries. The chromium alloy, therefore, remains an asset to many chemical pump manufacturers.

However, there have been numerous advances in metallurgy since stainless steel cookware first hit the market following the alloy’s invention in 1913. As industries have found themselves faced with a succession of new technical challenges, the demand for even more durable metal alloys has grown in parallel. Specialists have catered to these needs by developing a range of so-called superalloys with properties once considered impossible. In particular, a nickel alloy containing chromium and other refractory metals, known as Hastelloy, has gained popularity with many leading chemical pump manufacturers.

The superalloys are not only markedly more resistant to corrosion and abrasion than stainless steel, but they remain equally effective even at the high temperatures that are often essential or unavoidable in many industrial pipeline applications. However, those remarkable superalloy properties also command a far higher price tag than the older blend of iron and chromium used to produce stainless steel. Unlikely as the concept might appear, there is now a far cheaper yet equally effective alternative to costly superalloys based on the use of non-metallic compounds. While not available from all chemical pump manufacturers, units made from thermosetting epoxy resins can also offer their users several other significant benefits.

Firstly, these resins are resistant to a much wider range of aggressive liquids than their metallic counterparts, including the superalloys, offering users a near “one-size-fits-all” product. These units weigh only a fraction of metal models, which facilitates handling. Also, because they are less prone to vibration, they tend to run more quietly. However, corrosion and abrasion are not the only threats to pipeline operations. Pumping volatile organic solvents poses a different challenge for chemical pump manufacturers – the risk of fire and explosion.

Most units are powered by an electric motor that provides the kinetic energy to rotate an impeller via a drive shaft. Seals around the shaft prevent fluid in the impeller chamber from entering the motor where a spark could ignite a flammable solvent with disastrous and possibly life-threatening consequences. However, seals are prone to wear and must be renewed at regular intervals to prevent such leakages. In practice, the best way to eliminate leaks would be to eliminate dependence on seals. With that in mind, chemical pump manufacturers developed the sealless or mag-drive pump. The motor is isolated in a separate, solid housing and drives a ring of magnets that, by induction, rotate a second ring of magnets in the pump chamber which turns the impeller.

Prochem is the industry expert

Prochem is widely recognised as a local leader in its field. The company is known both for its extensive range of products from leading international chemical pump manufacturers and its locally produced units, including its cost-effective, rugged epoxy-resin models. 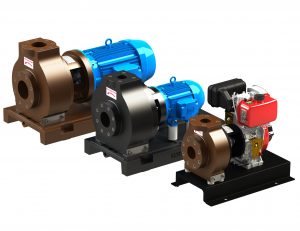