23 Jun Gear Pumps – Their design and some Common Uses

Posted at 09:30h in Articles by Carl Deary 0 Comments
0 Likes

Pumping devices fall into one of two main categories. Depending on their operating mechanisms, they are either positive displacement or centrifugal pumps. Most types fall within the former category. That includes gear pumps, which are most notable for their ability to maintain a near-constant flow of liquid or gas at any given speed, regardless of the discharge pressure. In practice, despite tight clearances, these devices do have a slight tendency to leak at high pressures. Nevertheless, that tendency is markedly lower than with centrifugal models. 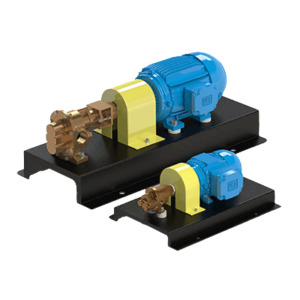 Although we might be inclined to associate gear wheels with modern machinery, they are, in fact, an ancient invention. For example, the Greeks employed wooden gears in water wheels. However, it was not until 1636 that a German engineer developed the first gear pump.

Gear Pumps – How do they Work?

Pappenheim’s 17th-century machine employed the same operating principle as many of those in use today, with only minor design variations. At the heart of these machines is a pair of interlocking cogwheels. When rotating one of the wheels with a motor, the other will turn in the opposite direction. Because the teeth on the cogs fit flush with the inner surface of the pump’s housing, the rotating wheels draw fluid into the casing, trapping it between their teeth and propelling it towards the outlet. As gear pumps generate a continuous flow, they don’t have an outlet valve as any obstruction to the outflow could cause a potentially dangerous pressure build-up. Instead, they may have a relief valve to prevent such eventualities.

These devices are available in two distinctly different designs, although both still rely on the interaction between driving and driven gearwheels. Their difference lies in whether the cogs rotate side by side or one turns inside the other. Based on this fundamental difference in their design, the two types are known respectively as external and internal gear pumps.

The external type utilises a pair of equal-sized cogs. These are arranged side by side and operate in much the same manner as in the 17th-century precursor mentioned above. By contrast, internal models employ cogs of different sizes. The outer one acts as the driver or rotor and is the larger of the two. The rotor has inward-facing teeth that mesh with those of a smaller cogwheel within it. The latter is positioned eccentrically and is the driven component or idler. Due to this configuration, both cogwheels in an internal gear pump will rotate in the same direction. Liquid enters the housing through gaps between the teeth in the outer wheel. It is then propelled by both sets of teeth, along the casing, to the outlet. As these design differences tend to influence a pump’s performance, each type has applications for which it is considered most suitable.

Possessing a limited number of moving parts means they are less expensive and easier to maintain than other positive displacement types. However, they cannot generate as much pressure as reciprocating models or equal the flow rates obtainable with a centrifugal pump. In practice, one of the main strengths of gear pumps lies in their ability to handle fluids with a wide range of viscosities, from organic solvents to heavy oils.

Because they have closer tolerances and more rigid support for their shafts, the external models can generate and maintain pressures of up to 3 000 psi. That’s significantly higher than is possible with the internal type. On the other hand, the higher suction generated by an internal model positions it as a better option for moving the high viscosity fluids. Together, the two types possess the capacity to handle liquids with a dynamic viscosity ranging from 1 to 1 million cP (centipoise) or 0,001 to 1 000 Pa·s (Pascal seconds). Commonly, gear pumps are manufactured from stainless steel or even cast iron. However, one can now purchase models made from durable new composites or one of the so-called superalloys. In this form, they are suitable for handling aggressive chemicals such as sodium hydroxide or sulphuric acid.

One limitation that applies to both internal and external types is neither is suitable for use at high temperatures or in applications that involve handling coarse solids in suspension or abrasive materials. That said, the ability of gear pumps to maintain a steady flow rate makes them an excellent choice for performing metering or sampling procedures.