23 Jun Sump Pumps and their Role in Liquid Drainage

Posted at 08:59h in Articles by Carl Deary 0 Comments
0 Likes

There are many instances in which it is necessary to provide some means to manage the accumulation of excess liquids. In some cases, a simple pit could suffice. However, more elaborate structures, such as a ship’s bilges, may sometimes be necessary. Each of these structures functions as a temporary sump, but suitable pumps will eventually be needed to drain them before they become too full. Unlike the inline units in pipelines, the pumping equipment for drainage operations will need to perform while totally or partially submerged in the fluid to be drained. 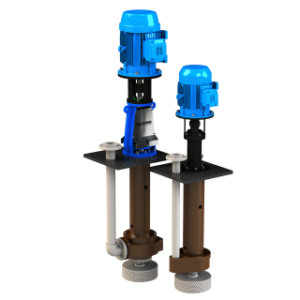 These devices have both domestic and industrial applications. They rely on the centrifugal forces generated by one or more impeller blades for their operation and are of two main types. In one, both the motor and impellers occupy the same submersible housing. In the other type of sump pump, a long drive shaft separates these two components, which allows the electric motor to remain clear of the liquid during operation. The latter design enables easy access to the motor for maintenance purposes, and also provides the user with a unit that is more portable. For clarification purposes, the semi-submersible units are known as spindle or pedestal pumps.

Although similar to a ship’s propeller, the geometry of an impeller’s blades enables it to pull a liquid in rather than pushing against it. In sump pumps, that same geometry generates a centrifugal force that drives the fluids around the casing and propels them, under pressure, to an outlet pipe.

Sump Pumps – For Domestic Use

Many homes offer the benefits of some additional storage or working space in the form of a basement area. These home additions may be wholly below ground level or only partly so, having a small window above the ground to admit a little daylight. If any part of a basement room lies below the water table, there is a risk it could become flooded, especially after a heavy downpour. Submersible sump pumps can provide homeowners with an effective means to prevent excessive flooding and expensive damage.

These units operate from within a pit dug at the lowest point on the basement floor. As water seeps in through the walls, it trickles to the lowest point, where it enters the pit. Once the water level reaches a predetermined level, either a float or a pressure sensor will activate the pump, transporting the floodwater, via an effluent pipe, to a suitable outdoor area. When installing submersible sump pumps, the electrician should include a suitable ground fault circuit interrupter. This precaution will eliminate the risk of electrocution.

By contrast, when installing a semi-submersible spindle pump, there will be less chance of water contacting live electrical wiring. Consequently, such precautions should not be necessary, and the motor will be more accessible. However, there is a downside. This type of installation is more intrusive, and the motor noise will be more audible.

Fire brigades often employ similar vehicle-mounted devices to assist them during the cleanup operation following a major flood in a populated area.

Sump Pumps – On the Industrial Scene

Many industries use sump pumps extensively, although few rely on them more than those involving the harvesting and refining of fossil fuels. Underground mine works invariably extend to a level well below the water table and are, therefore, subject to a constant influx of water from surrounding aquifers. Without a continuous and efficient drainage operation, the passages would soon become flooded and unworkable. Naturally, the floodwater also poses a constant threat to the lives of anyone working the deeper levels. Fortunately, mines can remain functional and their personnel safe thanks to the use of sump pumps in continuous dewatering operations.

In other sectors, such as the chemical industry, spillages are a common occurrence. Spindle pumps are frequently the best means to handle the cleanup. However, liquid spillages can be more than a mere inconvenience. When the spilt liquid is a concentrated acid or base, or some equally corrosive fluid, it can damage equipment and endanger the workforce. While these spillages can be dealt with in much the same way as the flooded mine works, handling corrosive liquids requires sump pumps with exceptional properties.

Because corrosive liquids can quickly damage stainless steel or cast iron parts, titanium and exotic alloys such as Hastelloy are possible though costly alternatives. However, Prochem uses synthetic thermosetting resins to produce sealless spindle pumps that are lighter, quieter and resistant to more chemicals. Furthermore, they are also much cheaper.