03 Aug Types of Dosing Pumps and their Uses

Posted at 09:44h in Articles by Carl Deary 0 Comments
0 Likes

The general public tends to perceive pumping equipment solely as a convenient means to transport fluids, as in the oil industry and water treatment plants. However, rather than maintaining a continuous stream of liquid in a pipeline, sometimes such equipment is necessary to deliver a measured volume of fluid on demand. It is for such purposes that dosing pumps were introduced. In addition to their ability to produce a discreet measured dose, these units are also invaluable when it is required to vary a liquid’s flow rate to maintain or adjust a parameter such as pH. 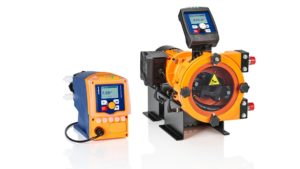 While it may be possible to rely on a centrifugal device to control the flow of low viscosity fluids at sufficiently low pressures, devices that employ an alternative action are generally more effective in this role. There are several possible ways in which dosing pumps can isolate a fixed volume of liquid and eject it as required. Of these, the two most common involve the reciprocating action of a piston or plunger.

The piston’s action is easily explained as it closely resembles that of a hypodermic syringe. As the piston is withdrawn, a measured volume of liquid enters through a non-return inlet valve. When depressed, the piston ejects the entire predetermined portion via the outlet valve. While the terms “piston” and “plunger” are often used synonymously, their respective roles in generating the reciprocating action of dosing pumps are similar yet slightly different.

In this case, the fluid chamber is never completely emptied. Instead, each time the plunger is withdrawn, a fixed volume of liquid enters the device, adding to that already present. Then, reinserting the plunger will eject a quantity of fluid equal to the volume of the plunger rather than that of the entire chamber. In each case, an operator or an automated system can adjust the dose delivered by altering the depth to which the piston or plunger is inserted before the withdrawal step.

The third type of mechanism commonly employed by dosing pumps relies on the action of a diaphragm. In this type of device, one wall of the pumping compartment consists of a flexible membrane that essentially mimics the effect of a piston. Mechanically stretching the membrane causes the fluid chamber to expand, drawing in a corresponding volume of liquid. Once released, the diaphragm reverts to its original size, expelling the measured dose in the process.

Many of humanity’s inventions owe their origin to some natural process. For example, peristalsis, the rippling contractions displayed by the mammalian digestive tract to transport food, has been adapted for use in some dosing pumps. Anyone who owns a tropical fish tank will be familiar with this type of device and its use to maintain a level of oxygen in the water sufficient for the fish to survive. Some of these peristaltic pumps use a pair of rollers to compress a flexible tube. Pressure from the first roller creates a vacuum, drawing in air. The second roller interrupts the flow, trapping a fixed volume of air and propelling it forward before sucking in additional quantities of air to create the segmented flow that forms air bubbles in the tank. When pumping various liquids for industrial purposes, the same principle applies, albeit on a larger scale.

In the fifth variety of dosing pumps, the measured volumes of fluid are produced by the action of gears or lobes. In this type of device, a set of meshing gears acts as an impeller, drawing, transporting and expelling the predetermined quantities of liquid. They are the least accurate of the five varieties discussed and are best used to handle highly viscous fluids in applications where a high flow rate is required.

The ability to produce a predetermined quantity of liquid on demand is a frequent requirement in many industries. For example, dosing pumps play a crucial role in water and waste treatment, power generation, pharmaceutical manufacturing and food and beverage production, to name just a few.

A water treatment plant will typically have several applications for these devices, beginning with the addition of measured quantities of alkali to adjust the pH of acidic source water. Similar measurements may be necessary when introducing a chemical flocculant to aid sedimentation and chlorine as a disinfectant during the final stage of treatment.